This time, I did very little research on what trail to hike next. My initial plan was to hike the Rocky Peak Ridge and Giant Mountain with some friends, but that fell through. So I decided to hike the Mount Colvin and Blake Peak trails and, if I had the energy, check out the Indian Face on the way back.

I drove down from Ottawa after work and slept in my car in the parking lot for hikers who aren’t members of the Ausable golf club.

The first 4.3 km of the hike to Mount Colvin was on the road. From there it was 5.3 km to the top of the mountain. Once I hit the turn off to Nippletop Mountain or Mount Colvin, the trail started to get steeper with several scrambles. The views from the top of Colvin were phenomenal.

After a quick break at the top of Colvin, it was a 1.9 km hike to the top of Blake Peak. New surveying methods place Blake Peak at only 3970 feet high, but it remains on the ADK 46 list for the sake of tradition. The trail was grueling. Lots of scrambling and almost climbing in some spots. There were a few nice ladders, but not enough. I don’t suggest the hike up to this peak unless you are going for the ADK 46. The peak is a wooded summit.

On my way back after descending Colvin, I had a decent amount of energy left and I didn’t want to hike the road so I decided to hike to Nippletop Mountain. I hadn’t purchased a map yet and all I had was a map I had loaded on my phone 24 hours before. Luckily, I ran into a group with a map and saw there were two ponds to refill my water a few hundred meters away.

After a quick water refill, I started up probably the most relentless ascent I’ve done in my life. From the pond until the junction near the top of Nippletop, the incline does not stop. Large boulder after large boulder. An hour later, I finished the grueling kilometer ascent and was rewarded with awesome views. Unfortunately, he top was crowded with a large group of hikers.

I didn’t stay long and made my way to Dial Mountain.

From the top of Dial I hiked to Bear Den Mountain which is another wooded summit. From Bear Den, I hiked over to the Noonmark Shoulder. This is a bald summit offering nearly 360 degree views. 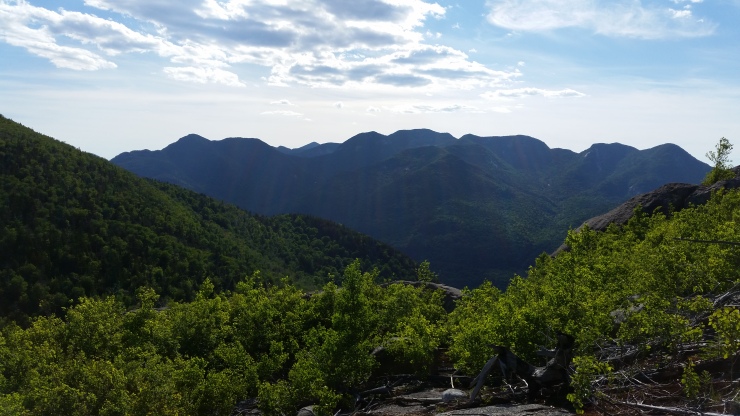 One of the views from the top of the Noonmark Shoulder.

The hike from the Noonmark Shoulder to the car is all a blur because my feet didn’t want to move anymore. I’d say the highlight of the way back was watching a bus full of hikers pass me after a day of hiking… I’m being sarcastic. When I got to the car, it was all worth it – 4 out of 46 peaks completed.

icon to make the Google Map full screen, to see all the photos I took and where they were taken. Click on the

symbol to see all the photos. There are 7 in total.