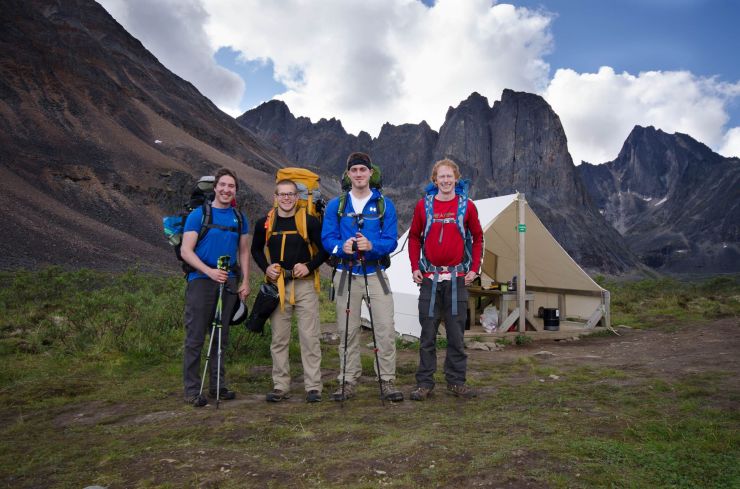 We all met up in Whitehorse after travelling from where we’re currently living; Edmonton (PA), Vancouver (Kyle), Moncton (Mark) and Ottawa (me). PA arrived before us and had already picked up our rental car. From there, we drove all the way to Dawson, had dinner and decided to sleep in our tents at the campsite near the interpretive center. 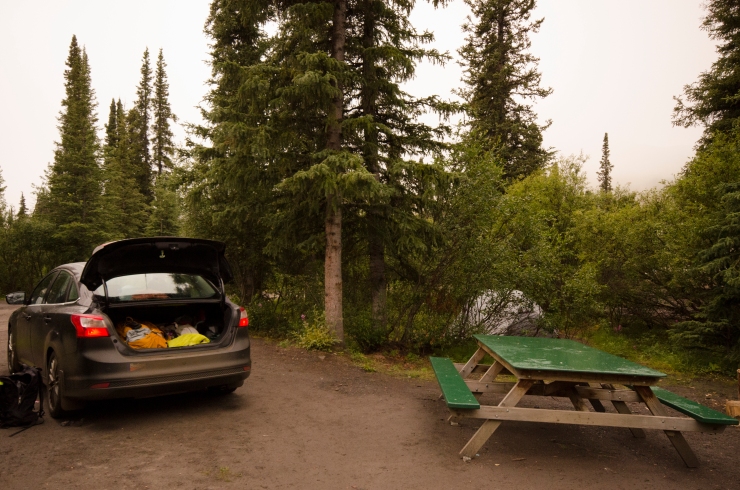 Day 1: We woke up and hiked to Grizzly Lake. The trail started out in a spruce forest but quickly became mountainous tundra. It was super foggy for most of the hike. The sun may have shown itself for a few hours. Then it turned to rain. Mark, my tent buddy, and I got to share the Voyageur 83, which is a 3 person dome tent made in 1983. It’s shaped like a hexagon and the fly was touching the tent which offered next to no water protection.

Day 2: We woke up to a pool of water in our tent, but it was sunny outside. We ate breakfast and spent the next 3 hours drying all of our stuff. Next was Glissade pass. The south side was soil and rock the north side loose loose rock. Going down it was super easy, every step you would slide another 5 to 10 steps worth of distance. At the bottom around km 14 there was a nice waterfall. We got to Divide lake and told ourselves its time to take a nice long break. After this we powered through till Talus lake. Kyle got to the campsite probably half a kilometer faster than the rest of us. Talus lake was gorgeous and you could see Tombstone mountain in the distance.

Day 3: Mark and I decided to scramble up the mountain near Talus Lake. We got about 100m to the top until we turned back for safety reasons. We had no rope or gear and we were basically climbing by the end. After this, we had lunch and dinner. Following dinner Mark and I attempted to get to the base of Tombstone. The valley is HUGE. We have no idea how far we got – probably about halfway. I had only brought a liter of water and neither of us decided to fill up, but thinking about it now, it was all running water with few people to contaminate it. The water there is probably safer than any well water I’ve drank from. We didn’t get there but got some great photos out of it, one of which was featured as the Weather Network photo of the day.

Day 4: We headed back to Divide Lake and got there in no time. We had plenty of time to just relax and chill. We ran into a French couple from Quebec who had dropped everything and decided to travel.

Day 5: From Divide, we went to Grizzly Lake. Mark and PA swam in Divide Lake. It snowed, then Kyle and I swam in Grizzly Lake. The temperature difference in 6 hours must have been 20 degrees. And we’re talking from 11am to 5pm. It rained during our last night, but we didn’t care all that much because it was the last night.

Day 6: When we woke up, it was still raining, so we decided to just power through until we reached the car. What a relief it was to get to the car – we were so wet and tired. I would totally do it again but bring trad climbing gear and a climbing guide just to get the top of some of these mountains. I bet the top of Tombstone is spectacular.

All of the photos in this blog were taken by the infamous Mark Ferriss. You can find all his photos at Mark’s Photography @markf5020photography on facebook

One Reply to “Tombstone Territorial Park”